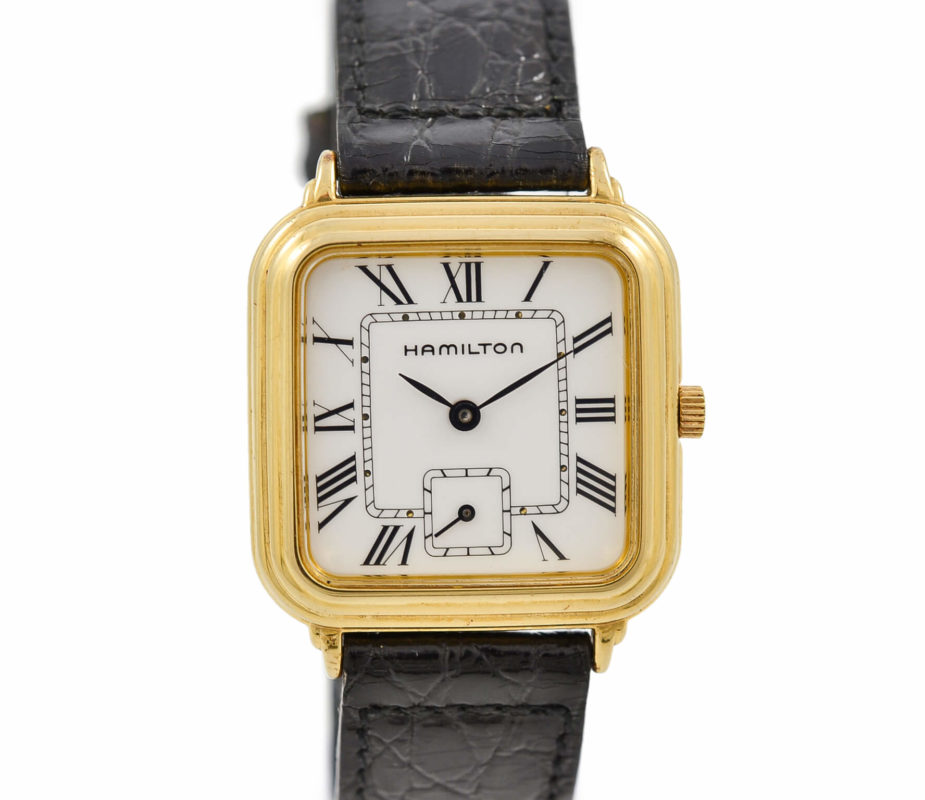 Presenting this Hamilton wristwatch from the 1990s, it was originally designed for gents but with today’s sizing being bigger than ever, its probably more suited for a lady, measuring 28mm in diameter and 32mm from lug to lug. The gold plated case is in great shape with only a few light scuffs here and there, the stainless steel back case pops in and exhibits the Hamilton logo and #6188 registered edition, there are some scratches here. The dial is beautiful and clean, white with black Roman numerals and a small subdial displaying the seconds, all under a mineral crystal which looks really good. The crown is unsigned and may have been replaced at some point. The watch is powered by an ETA980.163 quartz movement with 15 jewels and keeps perfect time. The bracelet is original and is used but still has plenty of wear left in it. It will fit a wrist of about 7” or 17.5cm approximately. The watch comes without the original box, but a gift box will be provided. Water resistance is not guaranteed so please do not use it near water.

Although it’s an American brand, with American roots, the Hamilton brand is now fully Swiss, and has been under the ownership of the Swatch group since 1974. First formed in 1892, they went on to become suppliers to the ‘modern’ railroad companies – supplying accurate watches to help with timings of the trains.

Taking that a step further, they supplied the U.S. Airmail service and have gone on to produce some ‘world firsts’ such as the Ventura which was the world’s first watch powered by a battery and Pulsar (1957), they also created the first LED watch in 1970.

Hamilton have been seen on the wrists of legends, perhaps the most famous being Elvis Presley in his ‘Blue Hawaii’ film.