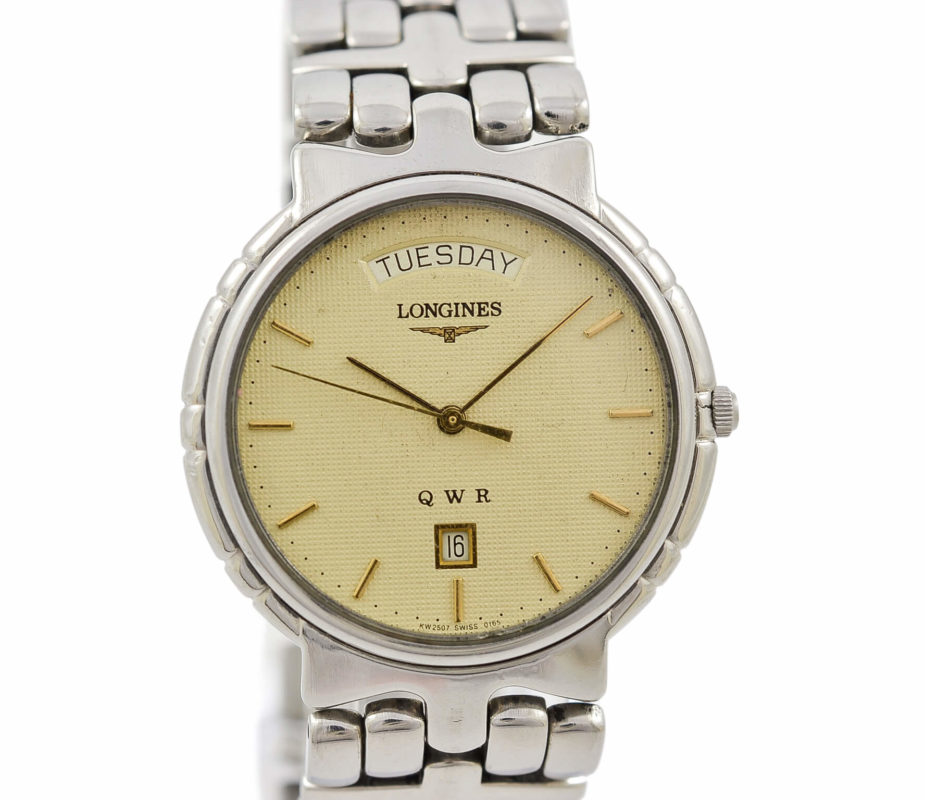 Longines is a brand that has been around for a long time and has featured in many sporting events as an official timekeeper. Presenting this rather rare 80s Longines QWR, it is the first one we have had in our possession and you have to admire the style it exudes with that day feature in the noon position. It has been crafted in a stainless steel case with a stainless steel case back, the case measures 35mm in diameter and 40mm from lug to lug. Although originally a men’s watch, it could suit a lady these days too. The beige dial has a slight sparkle too it, with gold markers, hands and the elegant date and day feature. The crown has been replaced with a regular steel crown and is unmarked. The back case is clean and relatively unmarked, under the case ticks away a quartz Longines movement which keeps time as it should. The crystal is mineral and is unmarked. The original strap has been kept but there are some marks on a couple of the links, it measures around 6.7” or 17cm approximately. All in all a nice piece and would look great on a smaller wrist! The watch comes without box or papers, and there are no guarantees with water resistance, so rather stay away from it.

Longines was formed in 1832, in Saint-Imier (also home to Breitling). Their respect for tradition shows in every aspect of their work, perhaps even down to their winged hourglass logo which was registered in 1889 and is the oldest unchanged but active trademark.

Longines epitomises style and sophistication; Audrey Hepburn, Humphrey Bogart and even Albert Einstein have all worn Longines. It’s no surprise that they have gone on to become one of the best
known brands in watchmaking.

The first in-house movement was created all the way back in 1867, the first chronograph arrived in 1878 and that was the basis for supplying timing equipment to may professional sporting events.