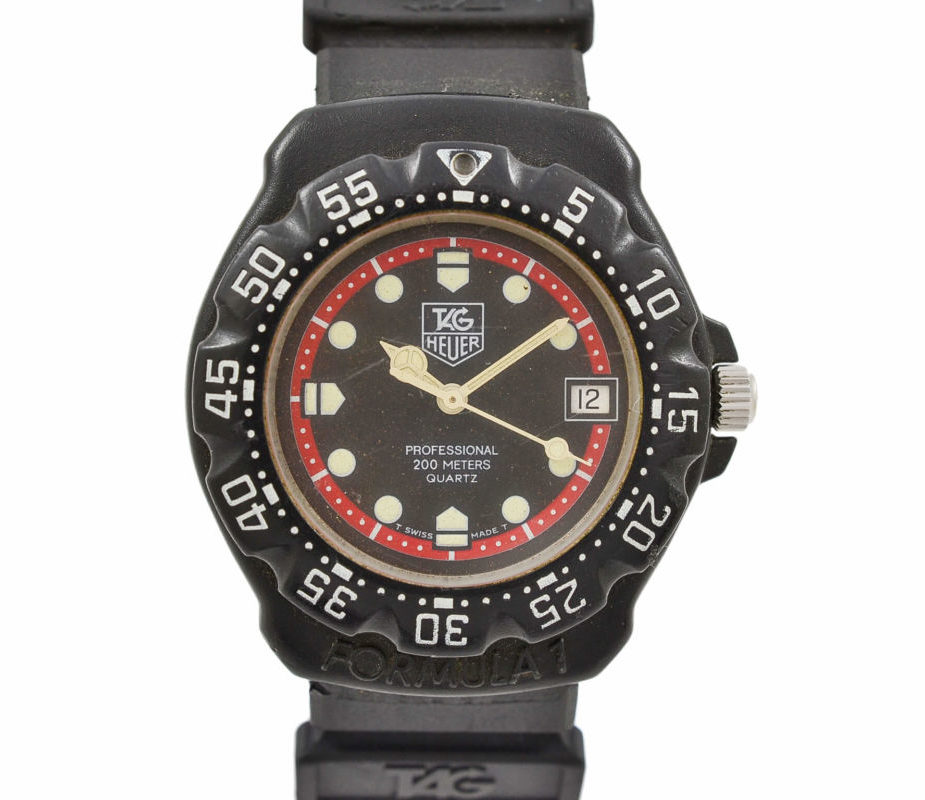 Formula 1 racing and Tag Heuer have always had close ties, so it was inevitable that they would come out with their own Formula one series watch and here it is! It’s a midsize watch, not as big as today’s watches but still a good size for a man or lady, the strap is really long though. The timekeeping is perfect as you would expect from Tag Heuer, its powered by a quartz ETA movement. Encased in black resin plastic and enticing us with its rotating black plastic bezel, with the well known ‘Click’ as it turns. Case measures 34mm in diameter and 40mm from lug to lug. The dial is black/red and is clean, the logo in the centre, there are the usual luminous markers, quick set date at 3 o’ clock and Mercedes’ hands, all kept under the mineral crystal which has a few small scratches from wear but nothing major. The crown features the logo, stainless steel case back also has the logo and screws in. The model number is 383.531/1, only light surface wear evident. It features the original Tag Heuer rubber bracelet measuring a massive 9.1” or 23cm. These models are becoming increasingly less common, especially in this condition. The watch comes with the original box and booklets. It has not been pressure sealed, so please don’t use it near water.

Originally known as Heuer, the company was founded in 1860 in St-Imier, the Tag association didn’t come about until 125 years later. Although some of the achievements have been overlooked, Heuer patented the oscillating pinion in 1887, which is still used by watch manufacturers today. Tag Heuer are best known for their sporting lines, such as the Carrera and Monaco, and it’s no surprise to see that wearers have included the likes of Muhammad Ali, Ayrton Senna, Steve McQueen and Tiger Woods.